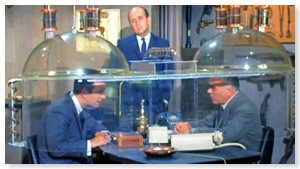 All About The Grace –Perspectives on Faith, Culture & Media Savvy

Do you remember the “Cone of Silence”? Think Nickelodeon TV, MeTV, or if you are old enough, perhaps you recall it from your after-school television viewing.  If you are not familiar with it, the “Cone of Silence” is a device used by good guy Control agents from one of my favorite 1960’s television comedy spy shows called Get Smart. The main characters, the Chief and Maxwell Smart, also known as Agent 86, attempt to have “top secret” conversations inside a plastic double dome that appears from the ceiling at the press of a button. The scenes where this “silent” chamber is used for private conversations results in exaggerated speaking and listening. It’s hysterical. You see, the gadget rarely works as designed rendering the characters virtually mute to each other. Subsequently, it requires shouting so they can be heard. This exercise hardly accomplishes the desired goal of a “top secret” conversation, to prevent the bad guy organization, known as Kaos, from getting wind of their plan.